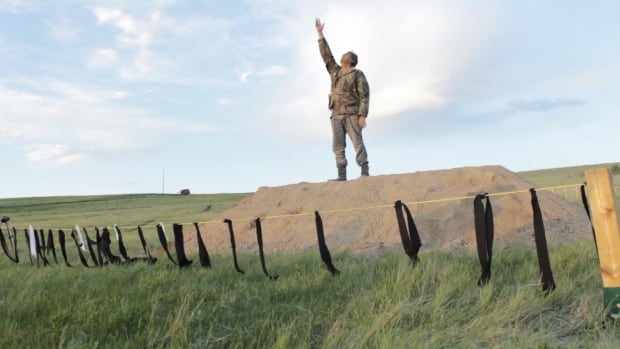 100 years of Canadian artists capturing the realities of war

This excerpt is adapted from Military Art in Canada: A Critical History, the latest edition of the Art Canada Institute’s online Canadian art book project.

Throughout history, there have always been creative responses to conflicts between different peoples and rival countries. Canada has an extraordinary history of military art, which encompasses a wide range of dynamic and, at times, surprising works.

The art of war can be done by anyone and in virtually any material. It encompasses sculpture, graphics, film, photography and digital media as well as crafts, textiles and sculpture. But Canada’s best-known visual war archives come from four official war arts programs: the First World War Canadian War Memorials Fund, the Second World War Canadian War Archives, the Second World War civilian artists of the Canadian Armed Forces during the Cold War and the current Canadian Forces. Artist program. Together, these programs have brought artists and soldiers together, resulting in the creation of amazing works of art that bear witness to victory, loss, service and sacrifice.

Established to record the achievements of the country, the Canadian War Memorials Fund has employed more than 100 artists and has led to the creation of nearly a thousand works of art, many by painters sent to forehead. Why? is one of the most iconic, as Frederick Varley brought together the gruesome scenes he had witnessed since his appointment as Official War Artist earlier in 1918 – rows of crosses, mutilated bodies on fields of swampy battle of churned mud and bones of dead horses as shells whistled overhead.

Writing to his wife about his work that year, Varley reflected: “A photograph of the same subjects would be horrible because it would be deadly literal – I escaped it and reached something worse – despair.” , and to get it, I had to experience this. “

When war broke out again in 1939, artists lobbied for another official art program, believing that in “all-out” war they had an important role to play in providing information and documentation. shared events. The Canadian War Records employed 32 official war artists who were divided between the three services – army, navy and air force – and served in all Western theaters of war, including Great Britain, Italy, Eastern Europe. Northwest and the Atlantic Ocean.

Artists’ missions typically saw them integrated into designated Army units, ships, and Air Force squadrons, and they were determined to work in the midst of combat. For example, in anticipation of the D-Day invasion on June 6, 1944, Orville Fisher innovatively tied tiny waterproof pads of paper to his wrist. After speeding up the beach from his landing craft, he made quick sketches of the battle unfolding around him using perfectly dry materials.

Fisher was one of the many artists for whom sketches and memorabilia became the basis of larger paintings. Jack Nichols saw a man drown while aboard HMCS Iroquois during the Germans’ attempt to evacuate Brest, France in August 1944. The image is etched in his memory, and he finished Drowning sailor in Ottawa more than a year later, in 1946. In the painting, a terrified German sailor unnecessarily clings to the water as he is dragged into its depths: he represents fear in the face of death. Describing this painting in 1998, Nichols commented, “When you drown, you lose your nationality, don’t you?

However, not all the arts of war are violent. The only official female war artist was Molly Lamb Bobak, and she did not travel overseas until after the war ended in May 1945. She created dozens of works depicting her peers from the Canada Women’s Army Corps. , including a fascinating portrait of a black Canadian woman working behind an army canteen counter. Sergeant Eva May Roy of the Canadian Women’s Army Corps was one of the small number of blacks enlisted in this service. She was in domestic service when she enlisted in the Canadian Army in December 1944; Seven months later she was sent overseas to England, then to Amersfoort in the Netherlands, where she likely met Bobak in the canteen. Very few Canadian soldiers of color were portrayed as part of the Canadian War Records program, although there were thousands of soldiers enlisted, making Bobak’s painting a tribute of exceptional significance.

After 1945, Canada renamed itself as a peacekeeping nation, and United Nations-sponsored missions dominated Canada’s military and diplomatic activities for the next four decades. The artists continued to record the activities of the Canadian Armed Forces, although these works were very different in subject matter from those of earlier war artists. For example, Blue helmet, a painting by Haitian Canadian Marc-Bernard Philippe, depicts peacekeepers interacting with Haitian children.

In recent years, several artists have created works in response to the war in Afghanistan. What they gave is Gertrude Kearns’ personal response to the traumatic events she witnessed in 2006 in Kandahar as an integrated artist in the Canadian Army. A suicide bomber detonated the vehicle carrying Canadian diplomat Glyn Berry, with whom she had just had lunch. Berry was killed at the scene and three Canadian soldiers were seriously injured, one of whom lost a leg. Kearns’ unprecedented access to medical facilities where the injured were taken inspired this painting, created in Toronto almost nine months later.

Today, The Art of War studies how conflict and war shape and reshape the country, rethinking our history and honoring those who serve in the present. Visual artist and performer Adrian Stimson, a member of the Siksika (Blackfoot) Nation of southern Alberta, was stationed at Forward Operating Base Ma`sum Ghar in Kandahar, Afghanistan in 2010, an experience that led him to paint portraits of native soldiers. He later turned to history – the battlefields Frederick Varley and his peers painted – and created a performance that reflected history and service.

Trench commemorates the approximately 4,000 Indigenous soldiers who served in the First World War. Guided by historical textbooks and working from dawn to dusk for five days, Stimson dug a trench six feet deep in the U-shaped pattern – which is also the symbol of the Niitsitapi (black feet) war – and Backed it up with 250 sandbags. His performance refers to Niitsitapi cultural practices that put the body under duress to allow healing. Simson hoped his work would draw attention to the incompleteness of First World War Indigenous history in order to help make it complete and honor it. In doing so, he takes a legacy shared by war artists in Canada for over a hundred years and redefines it for a new generation.